This page provides an overview of the RefactorScript language used by VisualGDB to define custom code generation patterns.

The RefactorScript syntax is based on a simplified C# syntax. It is optimized for extremely fast execution, so you can typically preview the results of running your script directly as you type it.

Each RefactorScript must contain at least one generator – a function that generates output. The simplest syntax for a generator is shown below:

Note that the [Main] attribute marks the entry point of the RefactorScript and is only needed if the script contains multiple generators.

Any line inside a generator that starts with “>” will be directly translated to an output line. E.g. the following generator will just produce the “//Hello, World” text:

Lines starting with “>>” will be treated as incomplete (i.e. no newline will be inserted after them). E.g.:

The generator above will produce the following output:

The lines starting with “>” and “>>” can use the “$” syntax to refer to expressions based on the generator parameters. E.g. the following script will output the name of the function passed to it:

The expressions can include multiple levels of fields, but cannot include function calls, e.g.:

The first input to the main generator always contains an object representing the C/C++ entity that was selected when running the script. It contains exhaustive information about fields, methods, variables, types, typedefs, etc. You can find a detailed reference of the RefactorScript data model here, or simply use the view on the right side of the RefactorScript window to explore it in real time:

Unless otherwise noted, the syntax of the statements is the same as for the C/C++/C# languages. Individual statements are described below:

The set statement creates or updates a local variable. E.g.:

The foreach statement iterates over all of the elements of an array. Note that each element will automatically have the IsFirst and IsLast fields set depending on their position in the array, e.g. to list all arguments of a function separated by “, ” use the following syntax:

E.g. for the typical main() function the script above will produce “argc, argv”.

The if() statement uses the same syntax as C/C++/C#. Note that each “>” and “>>” line counts as a individual statement. I.e. the two variants shown below are equivalent (and will produce the same output as the foreach() example above):

You can set local variables using the “set” operator as shown below”, e.g.:

For a typical main() function the script above will output “m_Argc, m_Argv”.

Note that the “varName = <…>” expression without a “set” statement will result in an error.

You can define the auxiliary generators or functions called by the main generators via the generator and function keywords respectively. E.g. the code below is equivalent to the previous example:

Note that each function argument must be declared with a type. See the next section for the list of supported types.

RefactorScript supports 3 built-in data types (string, int, Array) and an alias (bool = int) that can be used to put constraints on function/generator arguments. Additionally to them, every object describing a C/C++ entity has an explicit type assigned to it. See the RefactorScript Data Model Documentation for the list of supported types. You can also view the object types (including all parent types) via the right side of the RefactorScript window: 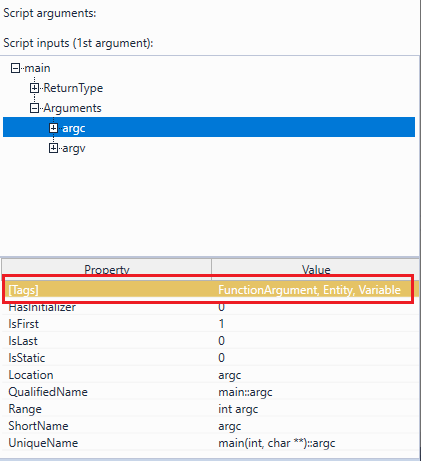 Note that most C/C++ entities inherit from the Entity type.

The string type represents a built-in string. It contains the following built-in functions:

The Array type represents an array (e.g. list of class fields). You can iterate arrays via the foreach() statement, or use the fields below:

The main generator of a RefactorScript can contain more than 1 parameter. VisualGDB will automatically translate them into the controls in the right side of the RefactorScript window, so that you can tweak your script behavior without having to edit it each time: 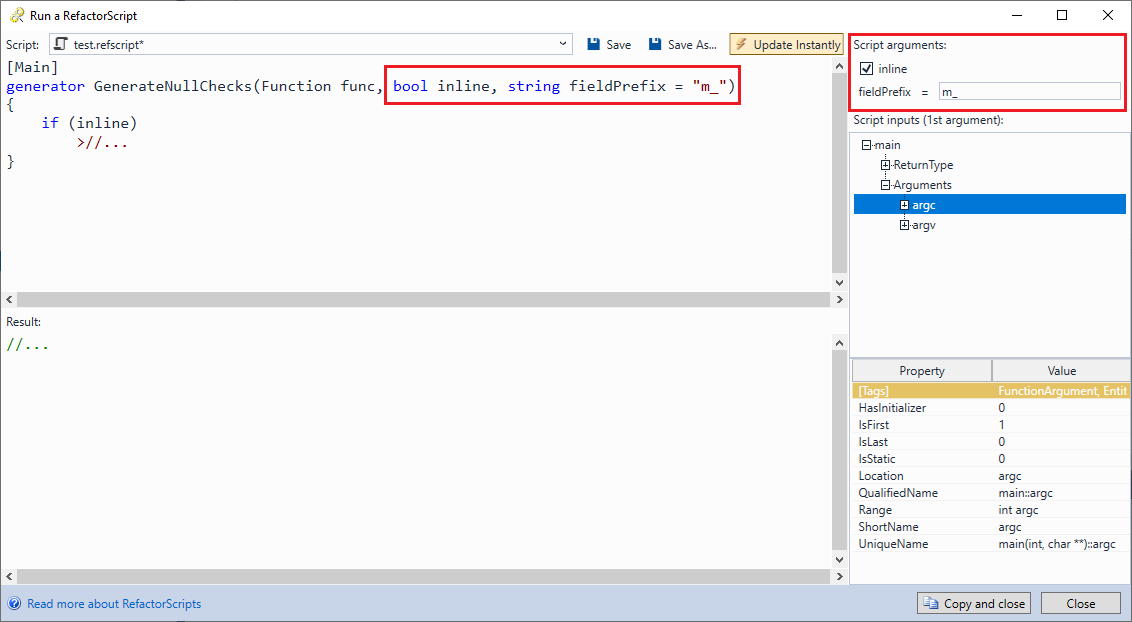 Additionally, if you provide the Description and SuggestFor attributes as shown below, VisualGDB will show the script as a smart suggestion in the code editor:

You can use the following entity types in the SuggestFor attribute to control the contexts where the suggestion will appear: