This page explains how to troubleshoot build errors in CMake projects caused by too long object file paths. This error typically results in the following message when trying to build the project:

You can also confirm it by reloading the project via context menu in Solution Explorer and checking the VisualGDB Build window: 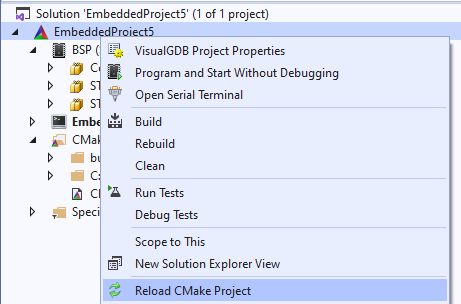 If you see one or more of the following warnings in the configuration log, the problem is caused by long object file paths:

In order to build the proejct, each source file (.c or .cpp) included in it needs to be compiled into a corresponding object file (.o). CMake would normally place the object files under following path:

If the source file is located on a different logical drive (e.g. C:\users\… while the project is located in D:\projects), CMake will use C/users/… as the relative path.

If the resulting path is too long (exceeds the value of the CMAKE_OBJECT_PATH_MAX variable), CMake will try to shorten it to the following form:

If you are using the Sysprogs CMake fork with this patch, it can shorten the long file paths even further to the following syntax:

If the length of the build directory and the target name are still too long to use this form, CMake will show a warning and proceed with the default unshortened path.

This section describes various workarounds to the problem.

Move the project under a shorter path

The easiest way to work around this limitation is to move the project under a shorter path. If the project is located under source control, consider creating a symbolic link:

You can then open the project using the shorter path (c:\prj\Name) while still keeping it under source control.

Another option would be to reduce the length of the build directory:

E.g. changing it from build/$(PlatformName)/$(ConfigurationName) to just build could reduce final path length by 15 characters (WARNING: this would cause clashes between debug and release builds).

Another option would be to increase the value of Tools->Options->VisualGDB->Embedded->Other->Maximum CMake Object File Path as close as possible to the actual MAX_PATH limit (260). Note that you would need to fully rebuild the project after changing it.

You can also reduce the length of the object file paths by using shorter names for targets (individual executables/libraries), since CMake uses them to derive the paths. If the target causing problems is generated from a VisualGDB BSP and has a long name (e.g. com.sysprogs.arm.stm32.<…>), you force VisualGDB to use a shorter name for it by editing the BSP.XML file as follows: