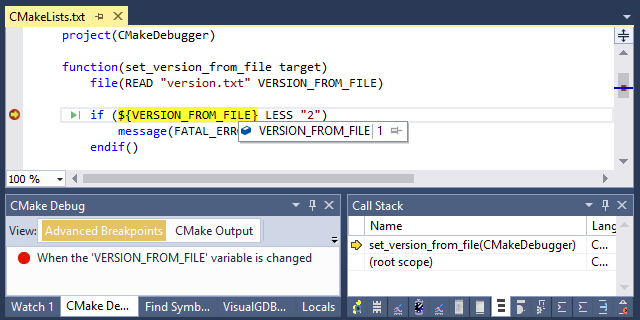 This tutorial shows how to use VisualGDB to step through the CMake scripts while analyzing CMake configuration problems. We will create a basic CMake project using a Linux cross-toolchain, add macros to read the version number from a text file, and will then step through the CMake statements in the debugger and show how to modify the version read from the file on-the-fly.

Before you begin, install VisualGDB 5.4 Preview 7 or later.

If you are running CMake on a remote Linux system, ensure you build our open-source fork of CMake that provides the script debugger functionality. Our port is fully backward-compatible with the regular CMake, so you can keep on using the original CMake builds on the machines where the script debugging functionality is not required.