This page describes the Advanced CMake Projects and outlines their differences from the regular VC++-based projects.

Unlike the MSBuild-based projects, Advanced CMake projects are completely independent from the regular Visual C++ Project Subsystem and are fully managed by VisualGDB. This enables a much deeper integration with the underlying build tools and also allows having multiple targets (e.g. executables or libraries) per project: 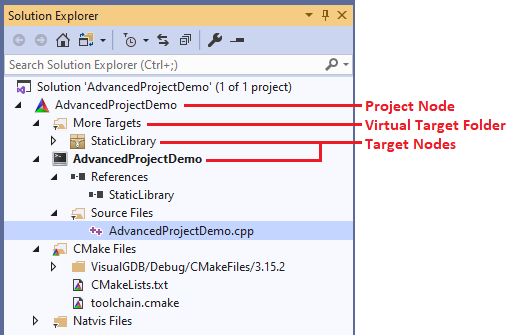 A typical Advanced CMake project consists of the following parts:

The project structure (targets, source files, etc) are not duplicated in the .vgdbsettings file. Instead, they are queried directly from CMake and rendered in Solution Explorer. Using Solution Explorer to add new files, or change any settings will directly update the necessary statements in CMakeLists.txt: 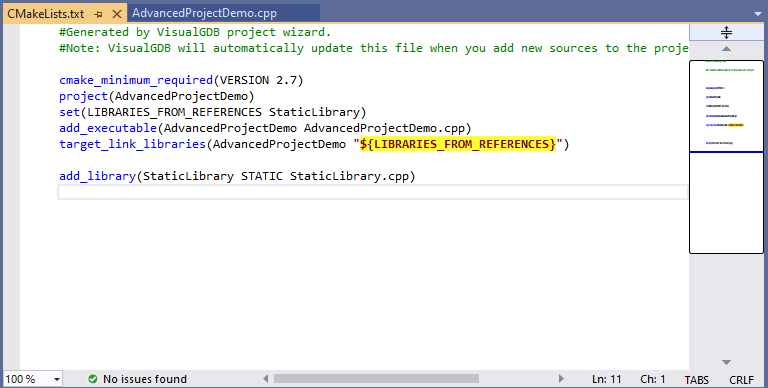 The Advanced CMake Projects have 4 types of settings shown below:

You can add new targets to the project by selecting Add->New Item in the project’s context menu: 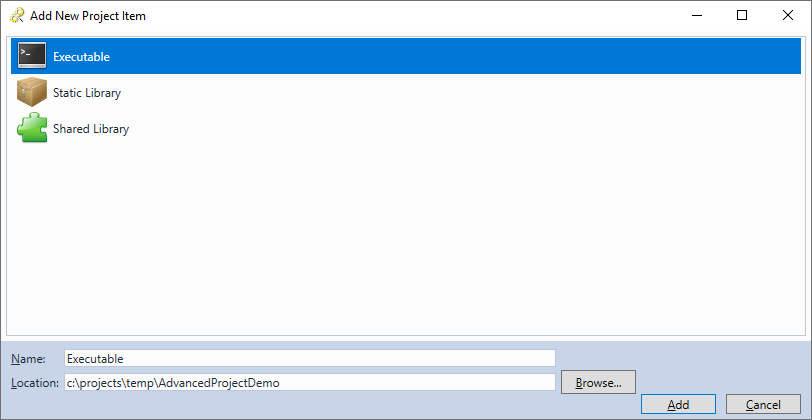 Selecting the same command in the target’s menu will add source files to the target instead.

CMake relies on external tools (such as GNU Make) to find outdated files and do the actual build. VisualGDB supports 2 build tools for the CMake projects:

You can switch between the build tools via VisualGDB Project Properties: 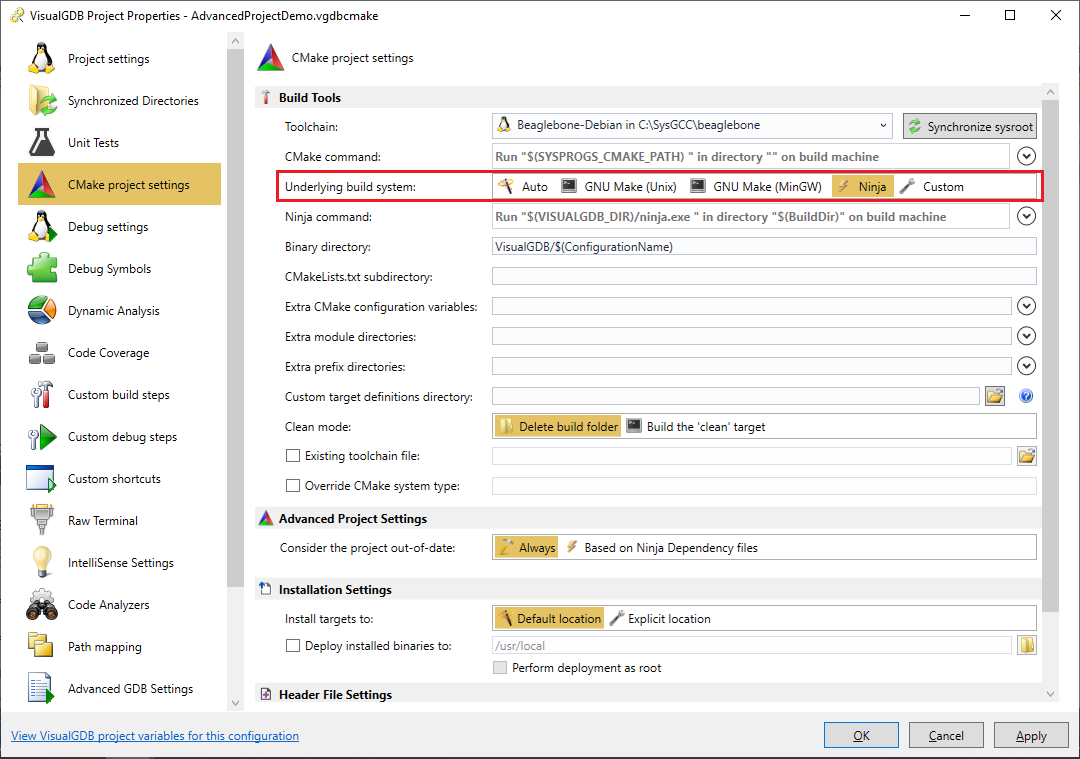 We recommend using Ninja instead of GNU Make, if your project and target supports its. Ninja works much faster on multi-core systems and is better integrated with the “project is out-of-date” check.

VisualGDB supports debugging CMake scripts by stepping into them (with breakpoints, watches and other regular debug functionality). You can start a CMake debug session by selecting “Launch CMake Debugger” in the project’s context menu:

If building a project with VisualGDB results in strange errors that don’t appear when building it manually, you can extract the exact command lines used by VisualGDB to configure and build the project:

Running the configuration and build .bat files manually will result in the same behavior as you observe with VisualGDB. If it is still different from the manual build, try modifying the batch files to 100% match the original build command.

If you discover that the project requires some environment variables or CMake Definitions that were not specified when importing it into VisualGDB, you can add them via VisualGDB Project Properties -> CMake Project Settings as shown below: 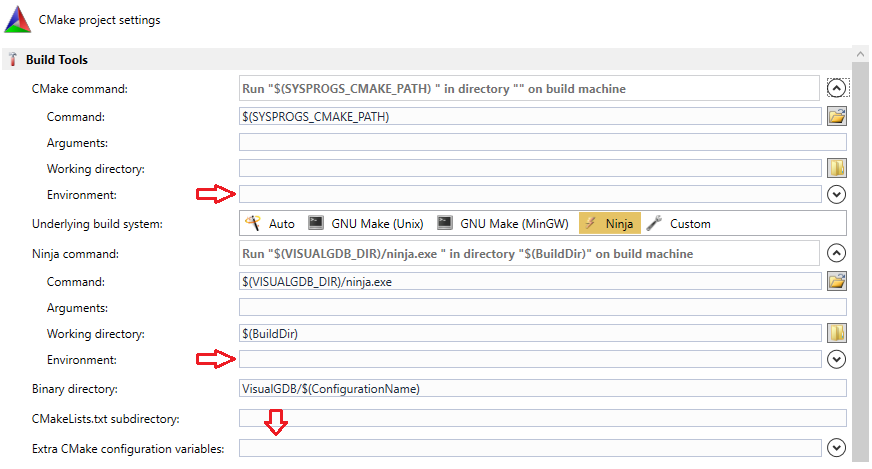 There you can set the following options: 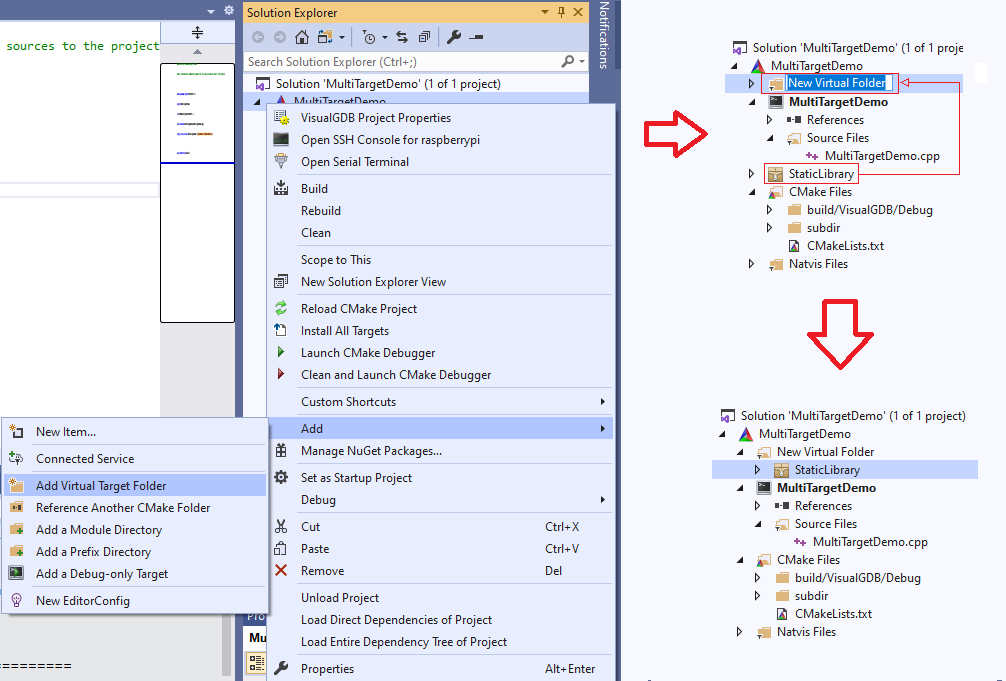 After the folder is created, you can drag targets or sources into it, and VisualGDB will remember it next time you open the project. The mappings between the target/source paths and virtual folders are stored in the .vgdbcmake files.