This page describes the structure of the MSBuild-based VisualGDB projects and gives an overview of common settings and file types.

MSBuild-based projects are supported for most Embedded and Linux targets and are very similar to the regular Win32 C/C++ projects. The main advantages of MSBuild projects over other project types are:

The only drawback of the MSBuild-based projects is that they cannot be easily built outside Visual Studio (see this section for possible workarounds).

You can easily tell whether the current project is using MSBuild by checking the active platform name and the project icon:

If the project has the regular VC++ project icon and the platform name is VisualGDB, this is an MSBuild-based project.

A typical MSBuild-based project consists of the following files and subdirectories:

MSBuild-level settings can be edited by right-clicking on the project node in Solution Explorer and selecting “Properties” (or pressing Alt-Enter). The MSBuild settings for VisualGDB projects are similar to the regular VS project settings: 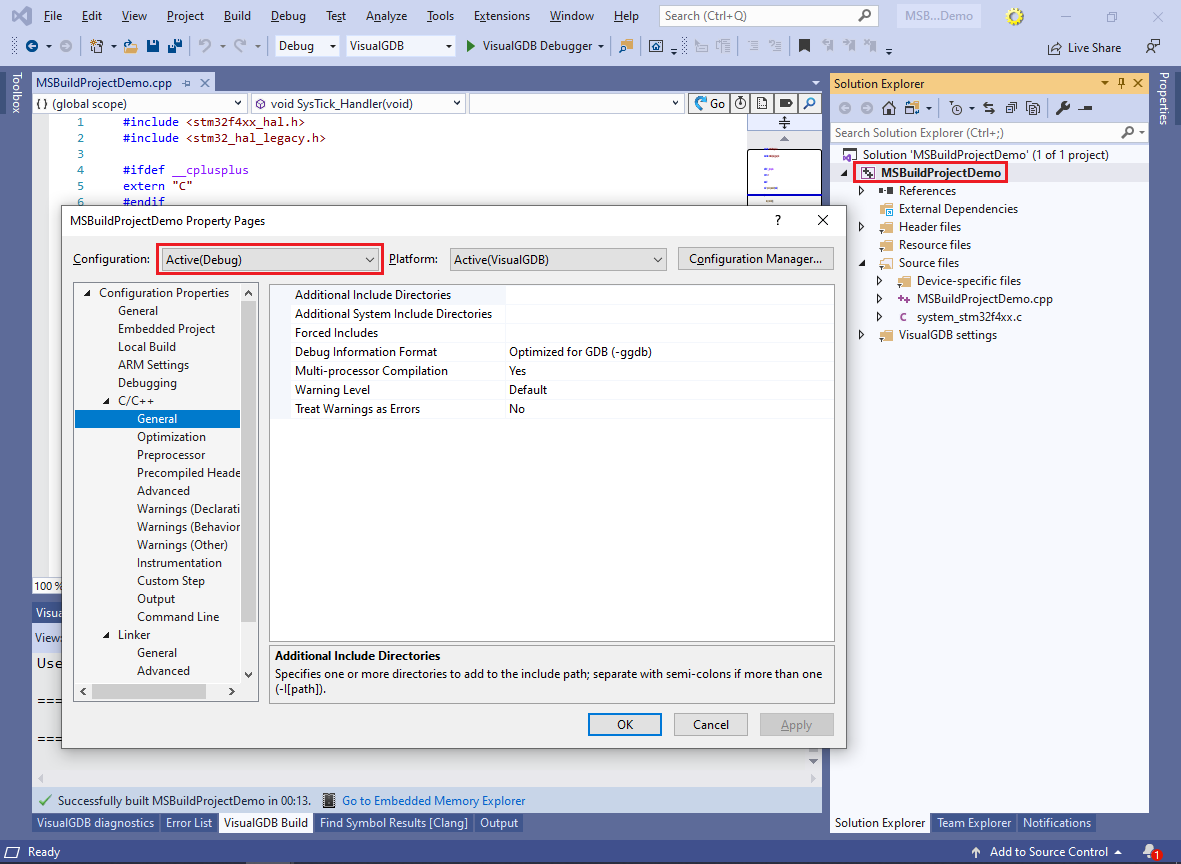 Note that the MSBuild settings are defined separately for each configuration (e.g. Debug/Release).

You can also define MSBuild-level settings for individual files, overriding the per-project settings:

VisualGDB-level settings are stored in the .vgdbsettings files and can be edited by right-clicking on the project and selecting VisualGDB Project Properties: 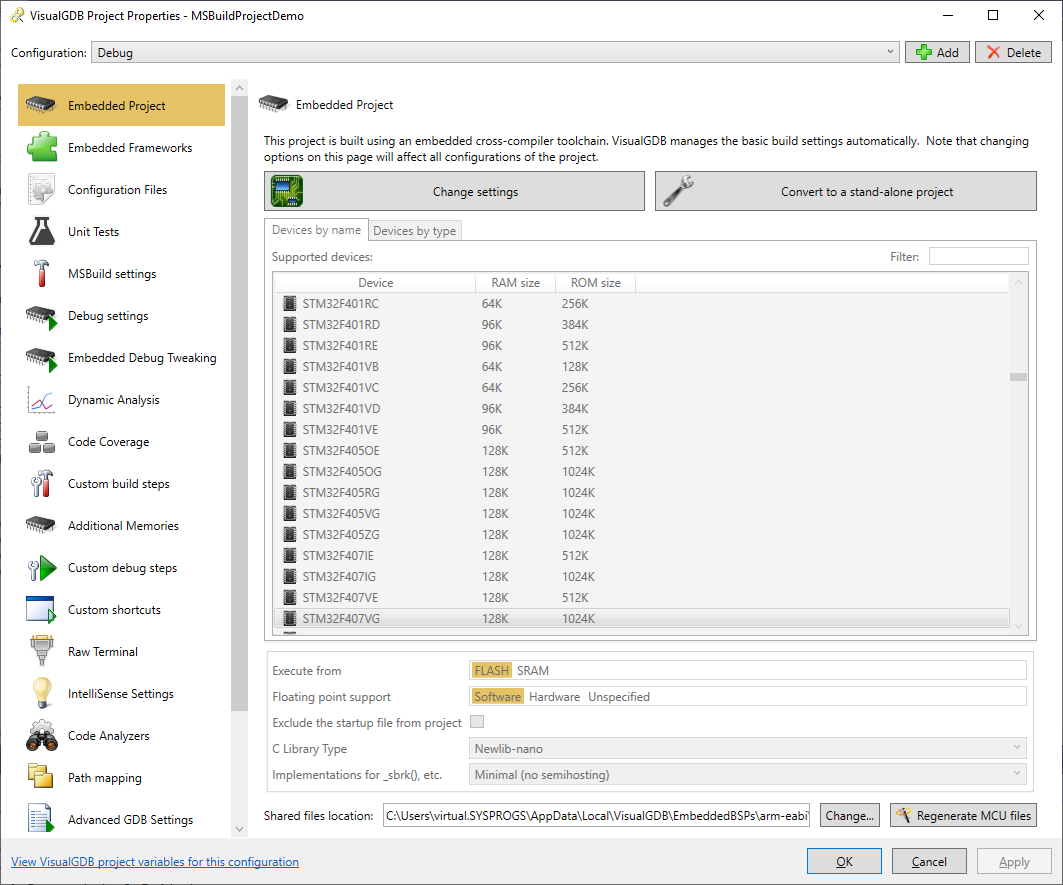 Note that the MSBuild Settings page of VisualGDB Project Properties is a shortcut to the most commonly used MSBuild-level settings. Editing the settings there will have the same effect as using the regular Visual Studio Properties window:

Below are the locations of common MSBuild-level settings for VisualGDB projects (under the VS Project Properties window for the entire project):

The recommended way of adding/removing configurations to MSBuild-based VisualGDB projects is via the top of VisualGDB Project Properties window:

This will automatically create the .vgdbsettings files for the new configurations.

Alternatively, you can use the regular VS Configuration Manager: 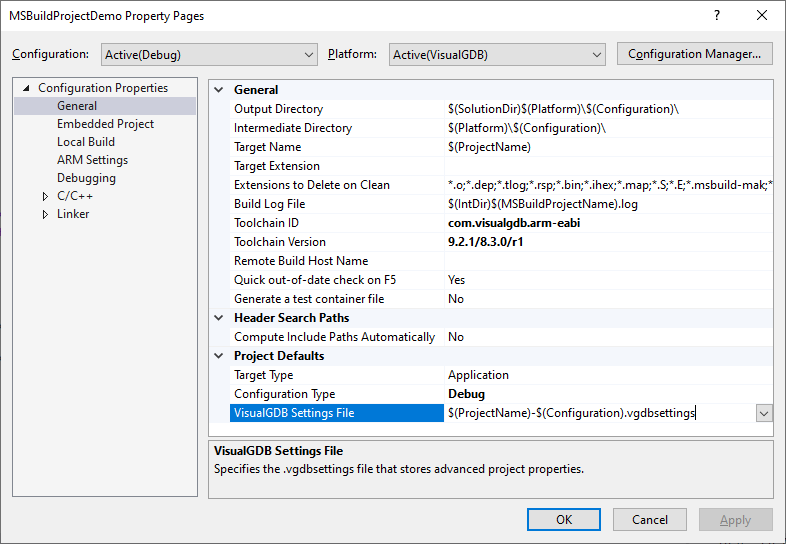 Embedded MSBuild-based projects use special variables, such as $(BSP_ROOT) to refer to files managed by VisualGDB:

These paths are resolved as shown below:

You can force VisualGDB to regenerate the FindXXX.props files outside Visual Studio by running the following command:

Note that it will also open the VisualGDB Package Manager, letting you install/uninstall various packages.

For projects built on the Windows machine, VisualGDB will save arguments for each tool involved in building the project in .rsp files in the object file directory. You can examine them to see what exact arguments are being passed to gcc, or edit them and quickly test out your changes by running the following command line from the project directory:

Note that VisualGDB will overwrite any changes made to the .rsp files next time you build the project.

For projects built remotely, VisualGDB generates a special .msbuild-mak file based on the MSBuild project properties. The file contains all targets and command lines used to build the project and can be built using GNU Make.

You can configure VisualGDB to dump all command lines involved in building an MSBuild-based project into a .bat file as shown below: 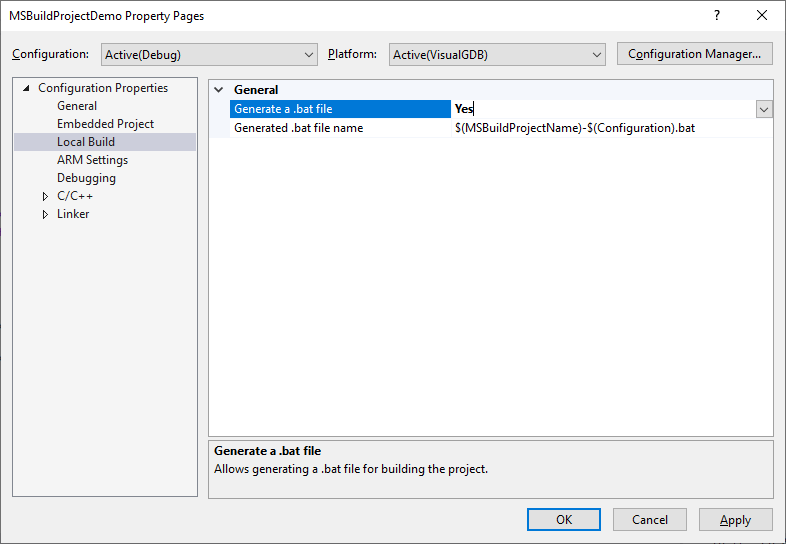 For more details on the embedded project structure, see this page.