This page provides a quick overview of the TinyEmbeddedTest framework. The framework follows the same design principles as the CppUTest and GoogleTest frameworks, and should be very easy to use if you have experience with these frameworks.

Each unit test based on the TinyEmbeddedTest framework is a separate function that can be tracked and launched independently. To make test selection easier, each test must belong to a test group. You can define the test groups as shown below:

Once a test group is defined, you can define tests using the TEST() macro:

Once you build the project defining the tests, they will appear in the Test Explorer window, organized by test groups: 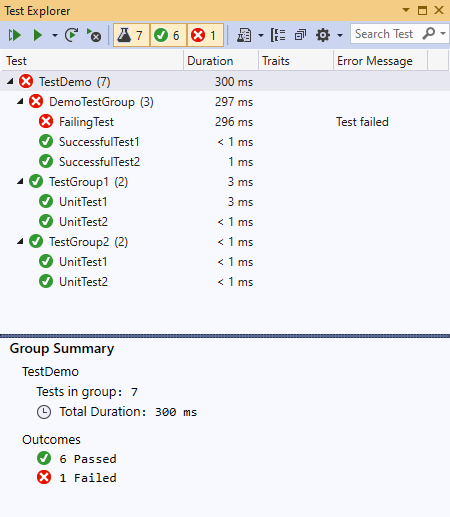 You can use the Test Explorer window to select and run any arbitrary subset of tests.

If you are running tests from command line, use the /testregex argument to filter the tests that are being run. E.g. the following command line will run UnitTest1 from both TestGroup1 and TestGroup2:

Test groups can define setup and teardown methods as shown below:

If you select one of more tests from a test group, the following will happen:

You can define custom assertion macros as well. If the assertion fails, the macro should call the printf-like ReportTestFailure() function. The message passed to that function will be displayed in the test failure summary in Solution Explorer.

The default TinyEmbeddedTest behavior when a unit test fails is to continue executing the test method, assuming that it will handle this properly. You can change this behavior via VisualGDB Project Properties -> Unit Tests:

You can find various other settings (e.g. whether to redirect printf() output to the test output window) on the same page of VisualGDB Project Properties.

TinyEmbeddedTest allows assigning attributes to tests to simplify selecting them programmatically. You can declare test attributes as follows:

In order for test attributes to be discovered correctly, each attribute must be a valid C++ class name (it doesn’t need to have a definition), e.g.

You can then run all tests with the MyTestAttribute attribute using the following command line:

You can use the CHECK_FOR_MEMORY_LEAKS() macro at the beginning of the test to automatically fail it if any of the memory allocated during the test was not freed:

This can also be done for individual blocks:

This section outlines common problems that occur in TinyEmbeddedTest-based projects and describes workarounds for them.

This error would happen if you simultaneously enable the “Redirect printf() to Test Output window” option in TinyEmbeddedTest and one of the following options:

It can also happen if your device (e.g. Nordic nRF5x) provides its own implementation of the _write() function. In either case, removing the other implementations of _write(), either by disabling the related settings, or by setting the “excluded from build” flag on the file providing them, will resolve the problem.

Tests not running for a newly created project

If you have created a TinyEmbeddedTest-based project manually, make sure you call RunAllTests() from main(). See our Unit Testing tutorial for more details.