VisualGDB supports 2 types of tests for embedded projects: Unit Tests and Integration Tests. This page explains the differences between them and the recommended use cases.

Unit Tests are essentially functions inside your program that check for certain conditions. They can be defined using one of the 3 test frameworks: CppUTest, GoogleTest and TinyEmbeddedTest (the only supported framework for IAR and Keil compilers).

The unit test functions run on the target device, so they need to be a part of the embedded binary, affecting the memory footprint. When you select a subset of unit tests in Test Explorer and run them, VisualGDB does the following:

The target program can automatically distinguish between regular debugging sessions (started with F5) and unit test sessions (launched via Test Explorer) using the IsRunningUnitTests() function. Below is a typical contents of main() for a project containing unit tests:

In order to physically exclude the unit tests from the release binary, simply create separate test and non-test configurations via VisualGDB Project Properties:

Then define a macro (e.g. HAS_TESTS) in the test configurations, and check it in the code.

Alternatively, you can set the “Excluded from Build” flag on the source files with unit tests for the non-test configurations: 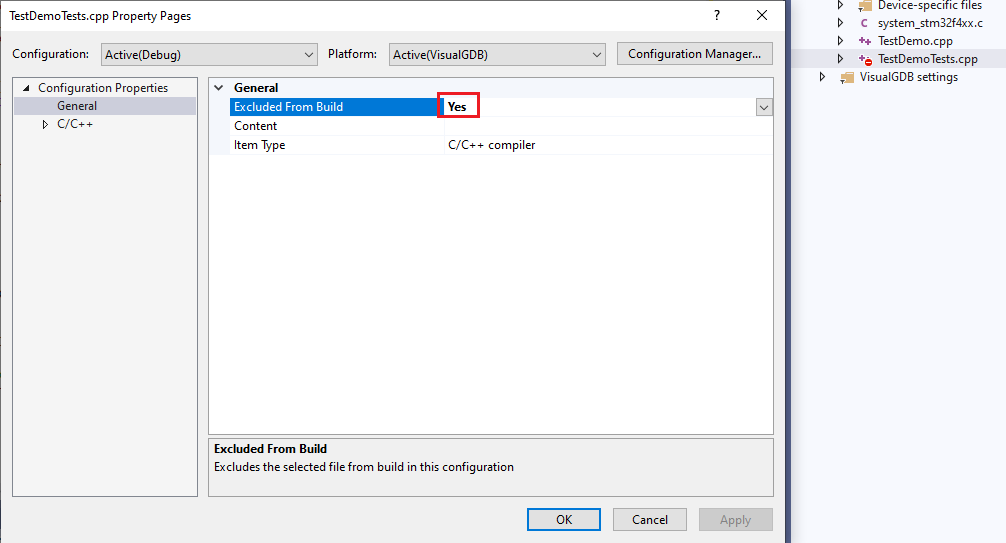 Large embedded projects can be partitioned into multiple static libraries linked together into the final binary. Each library can contain both the regular logic and the unit tests that will be conditionally compiled when building a test-enabled configuration:

You can create static libraries via the regular VisualGDB Embedded Project Wizard, however adding unit tests to them will require extra care:

You can also go for a more complicated layout having multiple test binaries additionally to the main binary:

This will reduce the memory footprint of test binaries, since only one of them will need to be loaded at the same time. VisualGDB will automatically show the tests from multiple binaries in Test Explorer and will handle the memory loading for you.

The Embedded Integration Tests are automatically recorded scripts that can replay common debugging steps and verify that the program responds to them as expected. The following steps can be recorded:

You can create the following assertions for the integration tests:

Embedded Integration Tests are stored in .vgdbtests files and will be shown in Test Explorer as long as the project includes the .vgdbtest file in Solution Explorer.

The Integration Test logic runs on the debugger side, so they do not introduce any overhead to the tested binary. You can use them in the production code to simulate common conditions (e.g. modify variables to simulate pressed buttons) and verify that the program responds as expected.