This tutorial shows how to debug applications running in Docker containers using Visual Studio and VisualGDB.

Before we begin with the debugging part, we will show why the Docker containers are needed and how they work based on a simple example. Assume we have two Linux machines, one having glibc (Standard C library) version 2.13 and another one having glibc 2.14. Let’s create a very simple C program using the memcpy() function:

If we compile and run it on the machine with glibc 2.14, it will run properly:

However if we try to run the same binary without recompiling on a machine with glibc 2.13, it will complain that glibc 2.14 was not found. Dumping the symbols imported from the application will show that the memcpy() function explicitly requires glibc 2.14 or later: 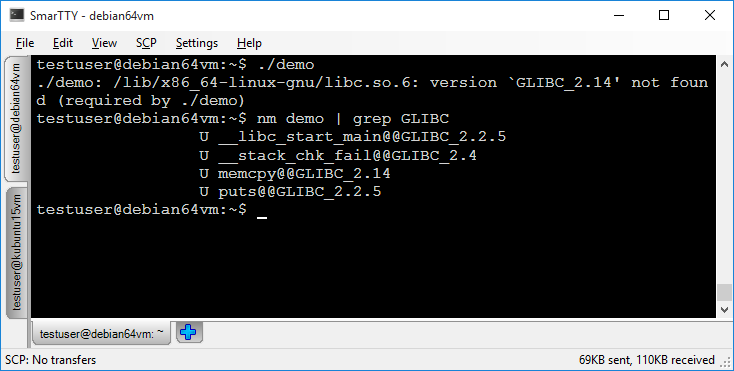 This happens because the behavior of memcpy() has slightly changed and the glibc maintainers wanted to ensure that programs compiled against the new versions of glibc will not run with the previous incompatible versions of the library. In this simple example we could update glibc on the second machine or recompile our program with the older version, however for bigger programs depending on multiple libraries, especially if they are not backward-compatible, could make shipping Linux binaries nearly impossible.

Docker allows packing an application together with all its dependencies into a single independent container and running it on any other machine with docker. You can view docker containers as lightweight virtual machines that have an independent set of user-mode components, but share the kernel resources of your host Linux machine.

In this tutorial we will use Visual Studio with VisualGDB to create a simple application, place it into a docker container and debug it inside the container.