This page explains the typical structure of an ESP32 project, lists the involved components, and outlines the most common errors that may prevent the project from working correctly.

ESP32 projects are based on ESP-IDF – an open-source framework from Espressif. You can find documentation on ESP-IDF here, or a list of official releases on the Espressif’s Github Repository.

VisualGDB ESP-IDF-based projects are specifically designed as to work as a thin wrapper on top of the ESP-IDF build system. While VisualGDB provides convenient GUI for many common ESP-IDF tasks, it does not introduce any changes to the underlying build process. This ensures that:

Each ESP-IDF release typically has a range of toolchain versions compatible with it. You can download most of the toolchains, together with the compatible ESP-IDF checkouts from our toolchain download page. If you still cannot build a project after reinstalling the toolchain, see the troubleshooting section for more detailed instructions.

A typical ESP-IDF-based project consists of the following components: 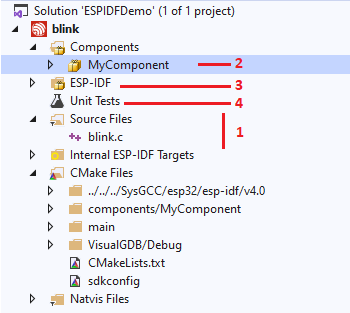 The contents of the main component are shown directly under the project’s node, while other components can be found under the Components node.

Each component is internally defined as a static library. The final firmware build by the project is obtained by linking all of the project’s components together.

Each component can define its own properties (e.g. include directories or preprocessor macros) via the regular VS Properties dialogs: 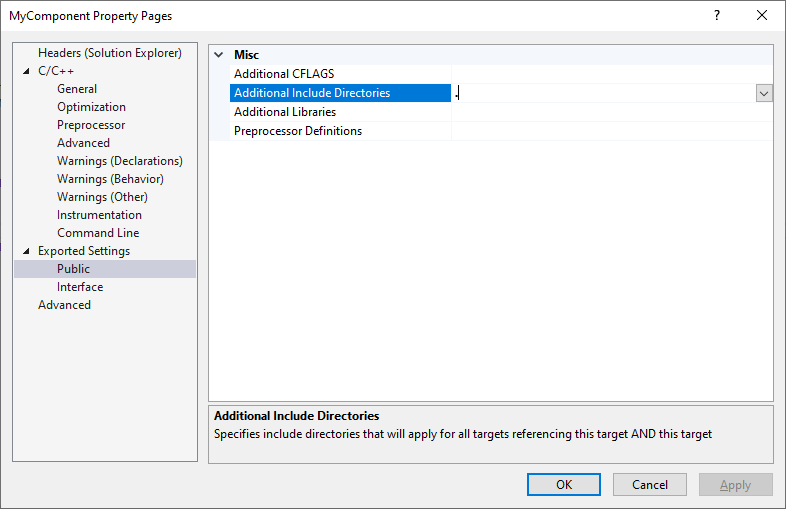 You can create new components in arbitrary locations, or reference existing component directories via the context menu on the Components node in Solution Explorer.

ESP-IDF projects can be built using one of the 2 setups:

We recommend using CMake + Ninja for all new projects, as it works considerably faster than the GNU Make. Also newer ESP-IDF releases, starting from 4.1 require a toolchain that does not support GNU Make anymore.

ESP32 projects are built directly using the ESP-IDF build scripts. I.e. VisualGDB will launch the build command line of the ESP-IDF framework, but will not have a low-level control over each compiled file. If you encounter problems building the project, see the build problem troubleshooting section.

ESP32 devices can be debugged via JTAG (this includes the ESP32 Arduino core). Generally, we advise using the ESP32-WROVER-KIT module, as it includes an on-board JTAG debugger and can be debugged out-of-the-box. Many other boards do not include a JTAG connector and require soldering in order get debugging to work. You can find example schematics for popular boards in our ESP32 tutorials.

If you do not have a JTAG debugger, you can still program the FLASH memory of the ESP32 module via the COM port by right-clicking on the project in Solution Explorer and selecting “Program FLASH Memory“. 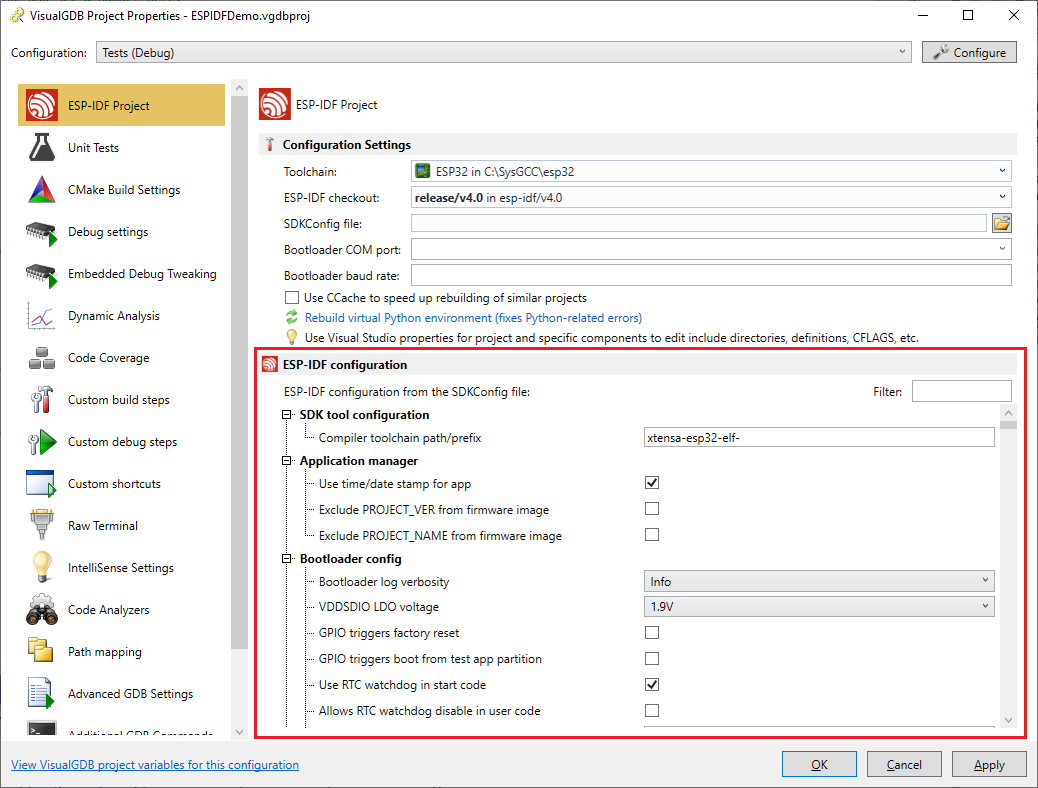 The configuration will be saved in the sdkconfig file that is used by the ESP-IDF build system when building the project.

You can create and run unit tests on the ESP32 devices, as long as you have a JTAG debugger. See this tutorial for detailed step-by-step instructions.

Because the ESP-IDF framework does not explicitly reference header files in the component definitions, VisualGDB tries to discover them dynamically based on the component’s source directory. Unless the automatic discovery of header files is disabled, adding existing headers to Solution Explorer will have no effect if the headers are not located in a place where they can be automatically discovered.

You can change the way VisualGDB discovers the headers for each target via per-target properties in Solution Explorer:

Note that unlike the regular Advanced CMake projects, header settings for ESP-IDF project node (1) will only affect the main component (<Project Directory>\main).

If you set the Header File Search Mode to Disabled, adding headers to a target explicitly add them to the idf_component_register() statement together with the sources.

As the ESP32 projects are built by ESP-IDF itself, rather than by VisualGDB, many build issues are caused by incompatible configuration settings, missing external dependencies or unsupported combinations of ESP-IDF and toolchain (see this section). VisualGDB can help you narrow down the issue by exporting the exact build command line used by it, as we will show below. 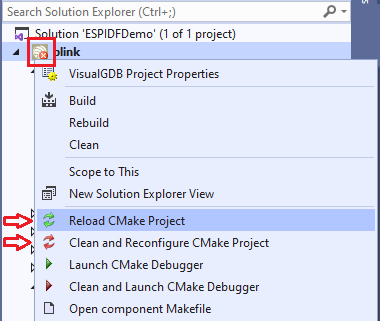 The build phase happens when you actually build the project via the Build Solution command.

Configuration problems are often caused by errors in CMake scripts or corrupt toolchain/ESP-IDF environments. Build problems are typically triggered by errors in the source code, or when trying to build a project created for an older ESP-IDF version. For both build and configuration, you can find out the exact command line used by VisualGDB to launch the ESP-IDF tools in the VisualGDB Build window:

You can dump the command line to a batch file using the context menu. The file will include the working directory and any environment variables, so you will be able to reproduce the problem outside VisualGDB. Note that the same build log can contain multiple command lines. Each command line that can be dumped into a batch file is shown in cyan.

If you determine that the build or configuration fails due to missing environment variables, you can specify them via VisualGDB Project Properties -> CMake Build Settings: 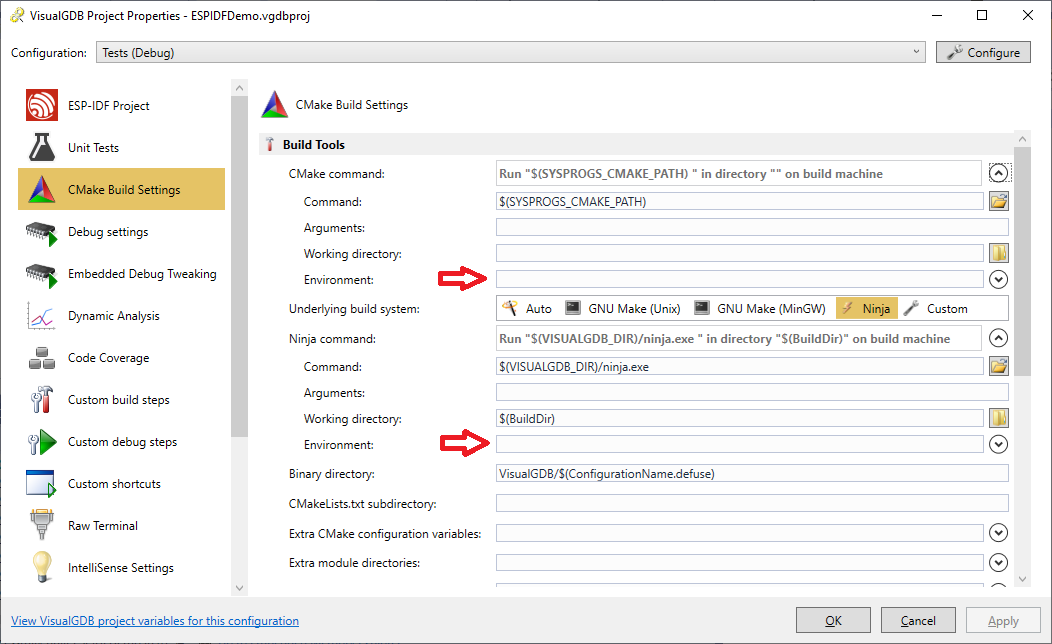 There are several versions of the ESP-IDF framework and typically each version is compatible with a specific revision of the ESP32 toolchain. If you observe strange package-related errors while trying to build ESP-IDF projects, please follow the steps below to ensure your ESP-IDF checkout and the toolchain are compatible:

If it still doesn’t help, see the Resetting Python Environment section below.

If you would like to try a pre-release ESP-IDF version (e.g. v4.1 or later) that is not yet shipped with our toolchains, please make sure you use VisualGDB 5.5 Preview 6 or later and the esp32-gcc8.2.0-r3.exe toolchain (or later), as the older toolchains use a layout that is incompatible with newer ESP-IDF versions. It may still not work as expected, so unless you are prepared to troubleshoot toolchain/Python issues, please consider using  stable ESP-IDF release shipped with our toolchains.

Normally, the toolchain revision increases for bugfix releases that completely supersede the prior ones, however this is not the case for ESP32 toolchains, where multiple different revisions may be needed at the same time.

You can configure VisualGDB to recognize multiple ESP32 toolchains with the same GCC/GDB versions using one of the 2 methods below:

Note that automatically managing multiple toolchain/BSP versions is supported starting from the Custom edition. If you are using a lower edition, consider manually changing the toolchain ID in the toolchain.xml file, so that VisualGDB will consider it a separate toolchain.

You can use VisualGDB to create projects based on the ESP-ADF framework as well. In order to do so, you can check out the ESP-ADF repository into your ESP32 toolchain: 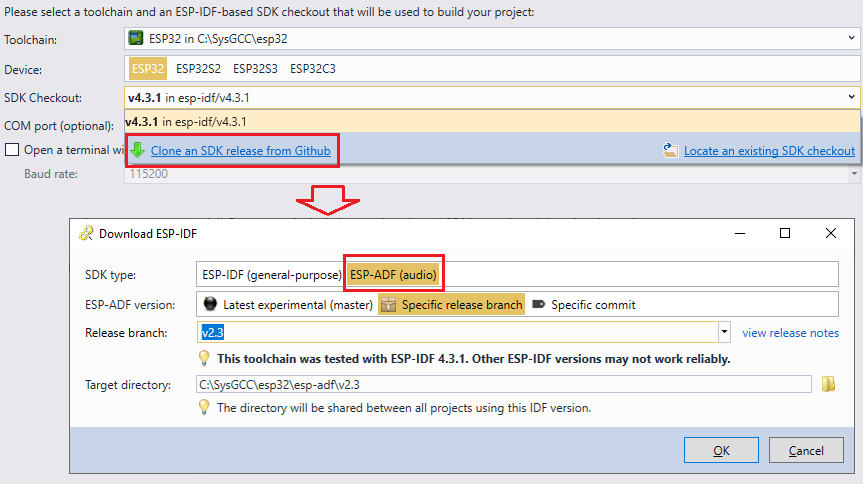 Note that ESP-ADF includes a separate copy of ESP-IDF as a Git submodule. However, there is a difference between the way it is handled by VisualGDB vs. the command-line Espressif tools:

As of ESP-ADF 2.3, the version of ESP-IDF referenced as a Git submodule is very old and may not work with some projects. To work around it, you need to manually go to the c:\SysGCC\esp32\esp-adf\<version>\esp-idf directory and run the following commands there:

You can find out the exact tag name by running “git describe –tags” in your ESP-IDF checkout.

Note that not all versions of ESP-IDF and ESP-ADF are compatible. You can find out the ESP-IDF versions compatible with a specific ESP-ADF release by checking the <esp-adf>\docs\en\get-started\index.rst file (search for “ESP-IDF versions”).

ESP-IDF 5.0 is a major update compared to ESP-IDF 4.x that requires a different toolchain and uses slightly different logic for managing Python environments. If you are running into issues after upgrading to ESP-IDF 5.0, you are likely still using some of the old components in your setup. Please follow the steps below to make sure you get a clean install:

If you are planning to customize your ESP-IDF environment (e.g. install aditional ESP-IDF checkouts/Python packages, manually run some scripts), please make sure you test out a basic project with default settings before doing that. If it stops working later, undoing recent customizations or doing a clean install again should easily solve the problem.