VisualGDB provides several mechanisms for importing external projects so that you could build and debug with Visual Studio. This page outlines these mechanisms and explains the differences between different ways of importing projects.

Normally, we advise starting with the External Build to quickly get building and debugging to work, and then switching to Managed Build for projects that will be actively edited.

Additionally, if your projects are compatible with one of VisualGDB’s Advanced Project Subsystems (e.g. CMake, Arduino, ESP-IDF, Mbed, NRFConnect), you can enjoy the benefits of both approaches. VisualGDB will use the external tools (e.g. mbed-cli) to build the project, while fully mapping the low-level build settings to convenient Solution Explorer GUI.

In order to import an externally built project, simply select “Specify a build command line manually” in the Embedded (or Linux) project wizard: 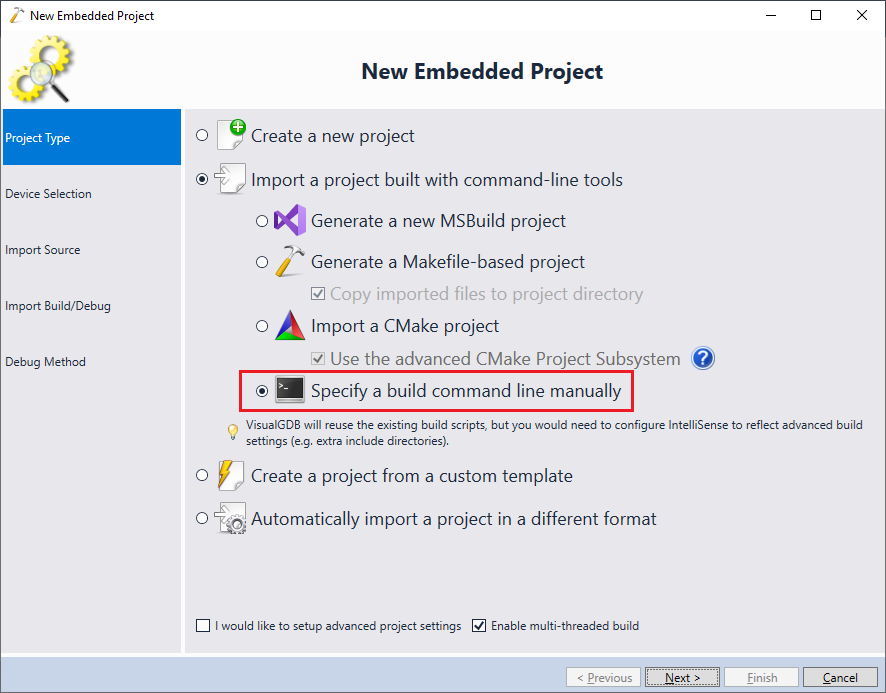 VisualGDB will ask for the build/clean command lines, as well as the path of the build output, and will create a basic project.

If you are importing an embedded project, VisualGDB will also ask for the toolchain and device type, however it will only be used to automatically configure debug tools and IntelliSense, and hence can be set very loosely.

You can later change the build/clean command lines and the output path via VisualGDB Project Properties:

This type of import will work with any project type regardless of the underlying tools. It could be using an exotic compiler, domain-specific build tools or BSP, etc. As long as the build command line produces a debuggable ELF file, VisualGDB will be able to build and debug it.

As a side effect, the contents of Solution Explorer (that drives IntelliSense) will be completely independent from the actual build process. Initially, VisualGDB will populate it with the source files from the project directory, but adding/removing them will not affect the actual build.

When you debug an externally built project, VisualGDB will use the gdb debugger from the toolchain you specified to debug the main binary configured via VisualGDB Project Properties. Note that the actual tools used to build the project can come from a different toolchain, or not be GCC-based at all.

The list of source files used to set breakpoints and step through the code is taken from the debug symbols (special data inside the ELF file) that are produced during build. They don’t have to match the Solution Explorer contents and will be accurate even if you keep Solution Explorer out-of-sync.

Externally built projects are internally implemented as NMake VC++ projects. You can use the regular VS Project Properties to specify the list of include directories and preprocessor macros to use for IntelliSense: 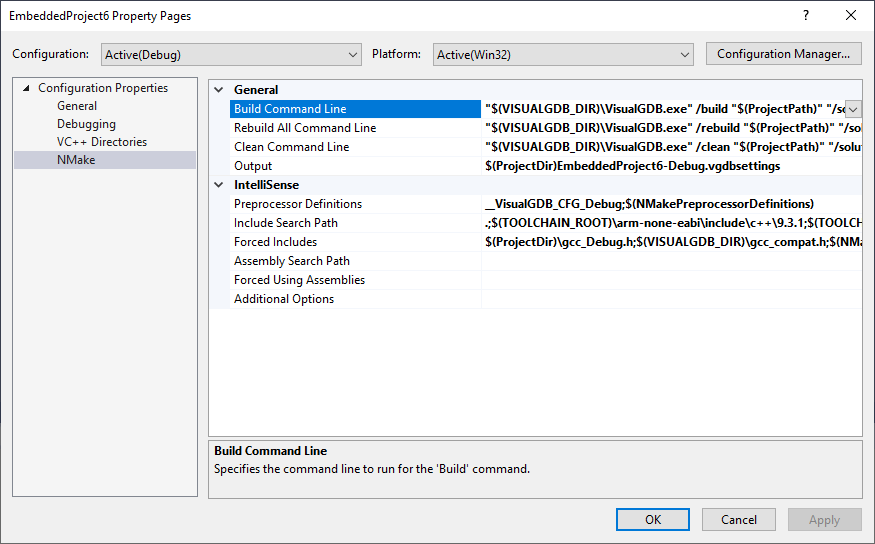 For convenience, VisualGDB provides its own IntelliSense page for managing IntelliSense directories. It will edit the same directory list as the regular VC++ Project Properties page shown above:

A better long-term alternative to externally built projects would be letting VisualGDB manage the build. This has several advantages over external build:

However, this requires additional setup. Specifically, VisualGDB will need to know the exact list of files participating in the build, and all the build settings (e.g. preprocessor macros, include directories, special optimization flags, etc.).

You will also need to decide on the build subsystem to use:

Once you decide on the build subsystem, there are several ways of importing the project structure into VisualGDB:

Note that they will not recognize many advanced settings (e.g. target-specific optimization flags) that would still need to be configured manually.

The project importing plugins can be selected in the Embedded Project Wizard as shown below: 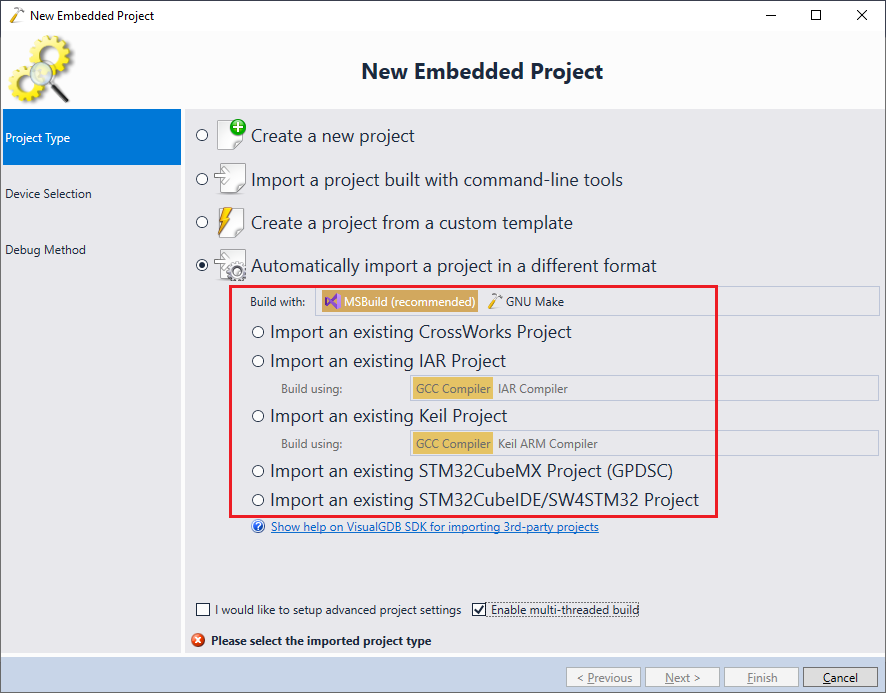 You can find the source code of VisualGDB’s project importing plugins in our GitHub repository, so you can customize them to handle previously unsupported project formats, or other special cases. We can also convert existing large projects for you as a part of our consulting services.

Note that if a project compiles with IAR or Keil, getting to build with GCC may involve some manual adjustments. Specifically, the following parts are not compatible between Keil, IAR and GCC:

Sometimes, the imported project would output would be different from the original project. This usually happens if some fine-level settings were not automatically converted. VisualGDB provides the following mechanisms for troubleshooting it:

See this tutorial for a very detailed example of a side-by-side comparison of the build command lines between Keil uVision and VisualGDB used to track down a difference in optimization setting.

You can find numerous tutorials on importing various project types in VisualGDB on this page.